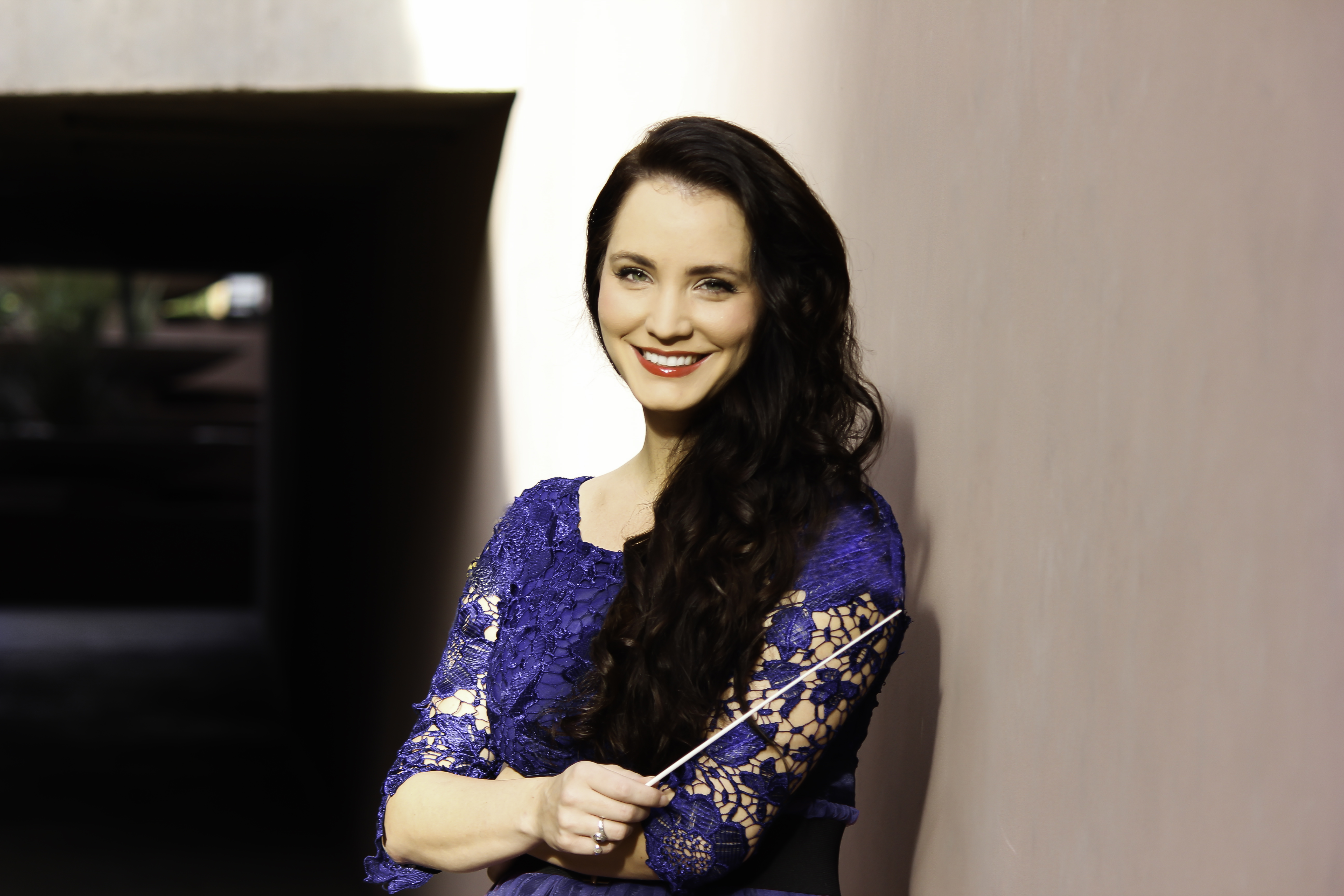 Erica Kyree Glenn is a versatile conductor, pianist, and soprano. She has led numerous choirs at Dean College and Arizona State University where she currently conducts the Women's Chorus (2018-present), serves as Chorus Master for School of Music operas, studies with Dr. David Schildkret and Dr. Jeffery Meyers, and teaches Beginning Conducting. Under her direction, the ASU Women's Chorus has sung alongside some of the finest area choirs, presented two world premieres by female composers, and worked with choral legends like Morten Lauridsen and Lori Lyford. Erica also music directs at the Sun Lakes United Church of Christ (chancel choir, bell choir) and the Fountain Hills Theatre, and is a co-founder of the ASU Women's Collaborative (facilitating collaboration between female composers and singers).
​
In 2019, Erica received ASU's GPSA Teaching Excellence Award, a $10,000 Department of State Title VIII Grant for Eastern European Research and Training, and full funding to guest conduct the Chattanooga Symphony Orchestra in workshop. She also presented a paper (“Song as Expression of Ukrainian Identity in the Ukrainian War”) at the 2019 AATSEEL-AZ Slavic Conference and led a session ("Music and Movement in the Diverse Choral Classroom") at the 2019 ACDA-AZ Student Symposium. In 2015, Erica traveled to Russia on an AISU grant to study the healing effects of Dalcroze music education on orphans suffering from Reactive Attachment Disorder. The following year, she presented an interest session on the topic at the Western Division ACDA Conference.
​
Erica holds a BM and MM in Music Theory and Composition, as well as an Ed.M. in The Arts in Education from Harvard, where she studied conducting with Dr. Andrew Clark, sang professionally with the world-renowned Harvard University Choir, conducted empirical research under Dr. Howard Gardner, presented at the Harvard Arts in Education Conference ("Bringing Classical Music from Background to Foreground"), became a semi-finalist in the Havard BRIDGE Educational Enterprise competition, and interned at the American Repertory Theatre.

As a composer, arranger, and playwright, Erica has worked with Charles Strouse (composer of Annie, Bye-Bye Birdie), Richard Maltby (writer of Miss Saigon, Miss Potter), Jason Robert Brown (composer of The Last 5 Years, Songs for a New World), and the music directors of several Broadway shows (Newsies, Wicked, Cinderella, Annie, Lion King). In 2013, she was selected to participate in the ASCAP Marvin Hamlisch Broadway Conductors Program in New York City on full scholarship, which culminated in a performance with the orchestra and leads from Broadway's WICKED. Erica herself has performed lead roles in over a dozen musicals. As a vocalist and pianist, she has given recitals internationally and has sung with the Brighton Festival Chorus and Royal Philharmonic Orchestra, the Mormon Tabernacle Choir, the Utah Symphony Chorus, the ASU Chamber Singers, and the Tuscany International Children’s Chorus (among others). She has also sung as a soloist and choir member in Italy (1999), England (2007; full scholarship), Ukraine (2008-09), Bulgaria (2015; AISU grant), and the Republic of Georgia (2018; Department of State award).
​​
Erica started studying piano and wrote her first rondo at age 6, and she composed her first full-length musical at age 12 (produced at two Utah theaters). She began her choral journey in the Utah Children's Choir (under the baton of Kay Asay, Doreen Rao, Craig Jessop, and others), and she is passionate about music education. From 2014-2017, Erica developed an innovative and collaborative performing arts department at the American International School of Utah as the founding Performing Arts Director and a member of senior management. Within a matter of months, the her six choirs had begun winning statewide competitions and receiving superior ratings at state festivals. They were also featured in PBS specials, Shaun Barrowes music videos and livestreams, and concerts alongside such icons as Kurt Bestor, Lexi Walker, Dallyn Vail Bayles, and Ivan Rutherford.
​
Erica's choral compositions have been commissioned by choirs across America, and her first opera won the international Opera-in-a-Month competition sponsored by VocalWorks. Her chamber works have won the Chanticleer Student Composer and Longy Graduation Composition Competitions and have been performed under the direction of Sam Pilafin (founder of the Empire Brass Quintet); Steinway Artist, Walter Cosand; Longitude conductor, Paul Brust; and St. Lawrence String Quartet cellist, Christopher Costanza. In 2000, Erica's full-length musical, Dancing Shoes, was awarded “Best Play of the Year” at a Utah theater, and four years later, her children’s musical, Between the Lines, placed first in the VIP Arts Competition. Her most recent musical, The Weaver of Raveloe, received both a developmental reading at the 2012 New York Musical Theater Festival and a 2014 world premiere at the American Repertory Theater’s second stage, OBERON. Erica currently publishes with LazyBee Scripts, and her shows have been performed throughout the US, the UK, and as far away as Germany, Australia, and Hong Kong.
​
Current research interests include the cognitive science behind audience perception of conducting gesture, the effects of Dalcroze music education on orphans with Reactive Attachment Disorder, and the lost history and music of the early 20th century Ukrainian composer Stefania Turkewich.